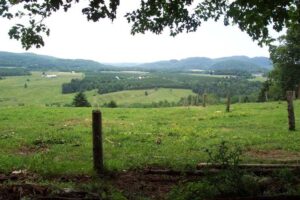 The Municipality of the Township of Harrington is located on a vast area of ​​nearly 244 square kilometers in the administrative region of the Laurentians, part of the MRC of Argenteuil. The municipality has 874 Harringtonoises and Harringtonois.

Recognized for its architectural heritage and its magnificent landscapes, the Municipality of the Township of Harrington is a corner of the country that highlights a picturesque nature where life is good. Mixed forests, rivers and lakes adorn its territory and residents appreciate the calm of the place and remember that in the past, there were dairy farms and field crops.

The distance between the township municipality of Harrington, Mont-Tremblant and Lachute is approximately 40 kilometres. Saint-Jérôme is located about fifty kilometers to the east.

The first settlers came there around 1830, they were Scottish immigrants who settled along the Perdue or Lost River, surrounded by mountains covered with forests and a large number of lakes. This stream is so named because a few miles from its source, the water disappears under a limestone rock that divides the waters of Gate and Fraser lakes.

The township was proclaimed in 1841 and around 1849, another group of settlers, originally from Glenelg, Scotland, founded Lost River, a small village located on the slope of a hill watered by the Perdue River or Lost River in English.

To this day, the Village of Lost River (or Village of the Perdue River) is part of the Township of Harrington. Another village on the territory is the village of Rivington whose name bore the post office from 1878 until 1961.

Other small villages or hamlets that make up the township of Harrington are the village of Harrington, Lakeview and Lac-Keatley.

The Township of Harrington was incorporated in 1855. Its name honors Charles Stanhope, 3rd Earl of Harrington (1753-1829), politician and British Commander-in-Chief in Ireland between 1806 and 1812.

Around 1900, the Notre-Dame-de-la-Victoire-de-Harrington mission was founded in part of the townships of Harrington and Grenville.